HOME > EN > People > Persona >
His Holliness Lungtok Tenpai Nyima, 33rd Menri Thrizin (also known as Sangye Tenzin Jong Dong) - born in 1927 in Kyongstang (region Amdo in Tibet). The spiritual leader of the Bon tradition, the abbot of Menri Monastery in Dolanji (India). He got educated in Phuntsog Dargye Ling Monastery, where under the guidance of Lopon Tenzin Lodro Gyatso H.H. acheived the Geshe degree. H.H. deepened his studies in Khana, Menri and Yungdrung Ling monasteries as well as in Christian monasteries, which he visited during the stay in Great Britain. Undertook the close cooperation with the Western scholars - dr Snellgrove and dr Per Kvaerne. Played the important role in the development of Menri monastery; the founder of Bon Children s Welfare Center. 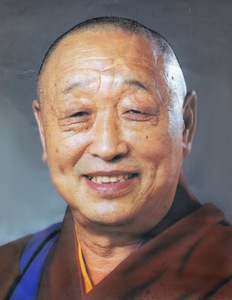 His Holiness Lungtok Tenpai Nyima was born in 1927 in the village of Kyongstang in the far eastern province of Amdo, Tibet. At age 8 he was brought by his father to a nearby monastery, Phuntsog Dargye Ling, where he began preliminary studies such as reading, writing and chanting. The young monk continued his studies there, and by age 16 entered the monastery s dialectic school. There he engaged in eight years of rigorous training under the guidance of Lopon Tenzin Lodro Gyatso, obtaining his geshe degree in philosophy with a specialty in Tibetan medicine, astronomy and astrology. At age 26 the young geshe traveled to the province of Gyalron, eastern Tibet, where he assumed the task of printing the Bon Kangyur, an important set of sacred texts comprising more than 100 volumes. This printing was accomplished using woodblocks in the possession of the king of Trochen Gyalpo, one of the 18 kingdoms of Gyalrong. His Holiness transported the completed texts by mule in a perilous six-month journey back to Phuntsog Dargye Ling.

Soon after his return he made a pilgrimage on foot to China, visiting many holy sites and traveling to Tsang Province in central Tibet. He furthered his studies at the Bon monasteries of Khana, Menri and Yungdrung Ling, where he became known as Sangye Tenzin Jongdong. Later journeyed by truck to Drepung Monastery in Lhasa, Tibet. He remained there until the violent Lhasa uprising of 1959, when demonstrating Tibetans clashed with occupying Chinese soldiers. At that time the 14th Dalai Lama and some 80,000 refugees, including many Bonpo lamas, were forced to flee across the Himalayas into neighboring countries. Sangye Tenzin Jongdong himself escaped on foot to the district of Mustang, Nepal, and then further into Nepal. He soon joined H.H. Sherab Tenpa Gyaltsen (the abbot of Yungdrung Ling Monastery) and many other Bonpo lamas at the Bon monastery of Samling, a very old and important Bon monastery in Dolpo, Nepal; and in time they all relocated to the valleys of Nepal.

In 1962 Dr. Snellgrove invited the three men (His Holiness, Samten Gyaltson Karmay and Lopon Tenzin Namdak Rinpoche) to join him in England under a grant from of the Rockefeller Foundation. As Dr. Snellgrove s assistants they taught Tibetan culture and religion. Geshe Sangye Tenzin Jong Dong remained in England for three years during which time he also visited and studied at Benedictine, Cistercian and other Christian monasteries. In 1964 he traveled to Rome, where he received a private audience with Pope Paul VI. Later that year he returned to India, and at the request of His Holiness the 14th Dalai Lama he founded a school in Massori, Northern India, staffed by volunteer teachers from the West and funded by British sponsors. The school was a place for Tibetan refugee boys to receive a high school education. For nearly three years he served as head of the school, each month sending his salary of 300 rupees toward the sustenance of refugee Bonpo monks and lamas living in Manali, India. In 1966 Geshe Sangye Tenzin Jong Dong traveled to Norway at the invitation of Tibetan scholar Per Kvaerne to teach Tibetan history and religion at the University of Oslo. In Norway on March 15, 1968, Sangye Tenzin Jong Dong received a telegram from India stating that the protectors of Bon had chosen him as the 33rd Menri Trizen: abbot of Menri and spiritual leader of the Bonpos.